To the casual follower of farmland price trends, reading recent articles about land values might seem confusing. One press release from Iowa, discussed the results of a state Realtors Land Institute survey that reflected an 11% price decrease from 2014 (click here for IA report). A similar survey in Illinois showed that values there were only down 1 – 3% during the same time period (click here for IL report). Considering that both states grow predominately corn and soybeans, how can there be such a difference in the direction that values are heading? Are Illinois farmers wealthier? Are they willing to take on more debt than their western counterparts? Were the yields in Illinois better in 2014, or are farmers there less concerned that the current low grain prices will last? I think all these ideas may have some merit, and there may be at least one more reason that has had some impact on the behavior of land buyers the past few months.

Realistically, the most obvious difference between the two states in 2014 was the corn yield – Illinois averaged 200 bushels per acre while Iowa averaged 178. When factoring in the lower price of corn, the extra bushels to sell could have been the difference between a nice profit last year, or perhaps none at all. The 5.5 bushels per acre disparity in soybean yields would have impacted the bottom line as well. In terms of the relative wealth and debt tolerance attitudes between the two groups of farmers, I personally don’t see much of a difference. However, one variance that I have noticed over the years is how much faster those in Iowa will respond to a change in the outlook for farm profitability.

This thought can be illustrated in the table below, which comes from Dr. Bruce Sherrick’s article published on the University of Illinois farmdocdaily website on August 15, 2014. If you click on the table, you will see that for most of the past 50 years, the average land price in Illinois was higher that that of Iowa. However, in 2007 that price gap began to shrink and in 2009 the average price of Iowa land actually overtook Illinois for the first time. I don’t think that it’s just a coincidence that this time period also corresponded with higher grain prices and higher farm profits. At the same time, the outlook for continued farm profitability looked quite promising as well, and average land prices in Iowa raced past those in Illinois.

The net income outlook for the past 18 months, however, has been entirely different (due primarily to lower grain prices), and Iowa land prices during this period have been falling at a much faster rate than in Illinois. Again, I don’t think this is merely a coincidence.

In summary, perhaps the biggest reason Iowa values are trending lower at a faster rate now, is because they trended higher at a faster rate before, due to excessive optimism by the farmers in the Hawkeye state. Over time, these differences should all balance out but in the interim, this trend may likely continue for the next year or two. 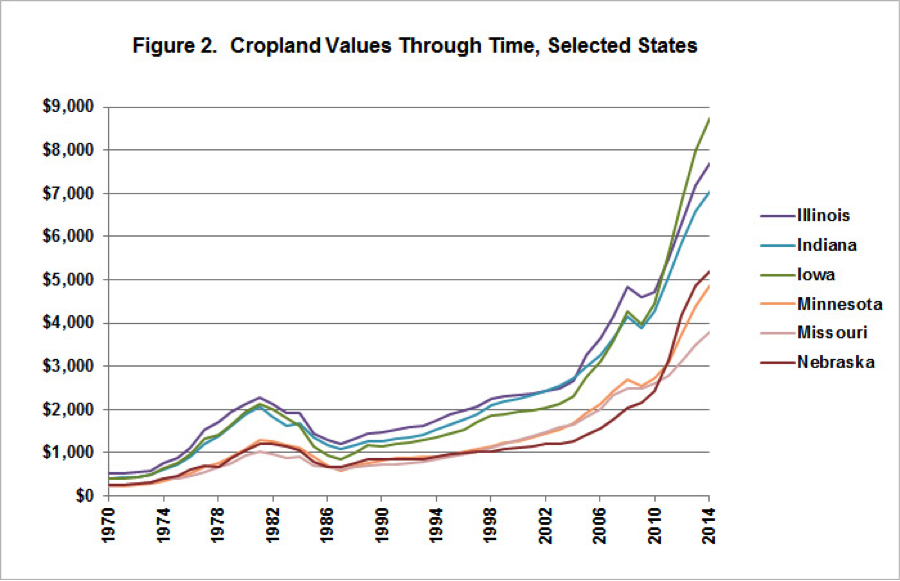